This project is progressing apace. Joshua has now removed the brown Victorian varnish together with some underlying and inappropriate car body filler from a previous poor restoration, revealing the original sweetly grained Italian walnut with various bumps and bruises which we will retain commensurate with age and character. Small areas of missing parquetry inlay have been replaced in matching boxwood and ebony. The later added rough pine stand base was found to be held together with nineteenth century wire nails in a manner which prevented the cabinet from standing up straight. After discussion and research we agreed that this was so obviously unauthentic that it was decided to remove it and reconstruct the feet in matching walnut in a form approaching the original. Removal of the later stand has brought the cabinet back into proportion and removed any hint of decayed timber. We are delighted with the result. 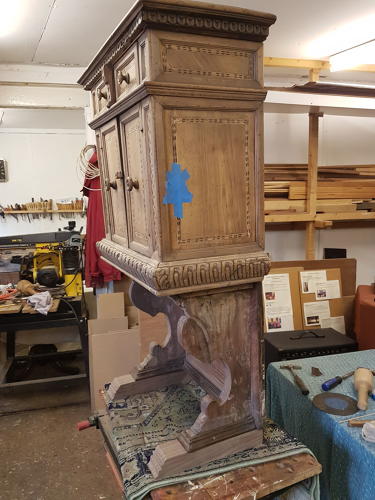